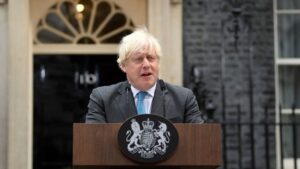 The spectacle surrounding Liz Truss, who on Thursday secured her fate as the shortest-serving prime minister in UK history, has quickly given way to a frenetic race to determine who will replace her. Will it be former finance minister and her recent opponent, Rishi Sunak? Or predecessor Boris Johnson, who could engineer a stunning comeback?

But as the world watches the drama unfold, a grim reality lurks: Whoever steps into No. 10 Downing Street next will inherit an economic mess with no easy fixes.

The Bank of England believes the country may already be in recession, and the economic outlook is expected to get worse before it gets better, as high energy prices push households to curtail their spending.

A government report released Friday showed retail sales fell 1.4% in September, a worse-than-expected drop. Sale volumes are lower than they were before the pandemic. Consumer confidence is near its worst level on record as inflation sits at a 40-year high.
British Chancellor of the Exchequer Jeremy Hunt speaks at the House of Commons, in London, Britain, October 17, 2022.

The UK just stepped back from the brink. But there’s more trouble ahead

At the same time, investor concerns about the United Kingdom’s finances, which burst into the spotlight during Truss’ tenure, will make it difficult to unveil any stimulus beyond immediate support for energy bills.

“A key focus for the next Prime Minister and their chosen Chancellor needs to be fiscal responsibility,” Carl Emmerson, deputy director of the Institute for Fiscal Studies, said in a statement on Friday. “We need a credible plan to ensure that government debt can be expected to fall over the medium-term.”

Although one top Bank of England official indicated this week that investors may be pricing in too many interest rate hikes, the central bank is expected to remain tough in the near-term in its campaign to get prices under control.
An economy in recession

Economists agree that if the United Kingdom isn’t already in recession, one is likely to arrive soon. The country’s output shrank by 0.3% in August, following an expansion of just 0.1% in July.

Dean Turner, an economist at UBS Wealth Management, called the spending outlook “pretty grim, to say the least.” The main questions now, he said, are how long a contraction lasts and how deep it becomes.

The picture of the United Kingdom’s financial position also darkened with the release of fresh data on Friday showing that Britain’s government borrowed £20 billion ($22 billion) in September, £5.2 billion ($5.7 billion) more than the country’s fiscal watchdog had expected.

“The weakness in retail sales and overshoot of the Office for Budget Responsibility’s March public borrowing forecast won’t make the next Prime Minister’s task any easier in navigating the economy through the cost of living crisis, cost of borrowing crisis and the cost of credibility crisis,” Ruth Gregory, senior UK economist at Capital Economics, said in a note to clients.

The pound fell 1.4% against the US dollar on the heels of the gloomy reports, sinking below $1.11. It could continue to lose ground as the dollar pushes higher.
The cost of uncertainty

Truss has said the Conservative Party will install a new prime minister within a week. Despite questions about who it will be — and who will lead the Treasury under his or her leadership — investors and economists expect the revamped economic plan outlined by current finance minister Jeremy Hunt to remain intact.

On Monday, Hunt — just days into the job himself — announced the rollback of almost all tax cuts in Truss’ original “growth plan,” which had been rejected by investors. Citing a renewed commitment to controlling the country’s debts, Hunt also said the government will universally cap energy prices only until April. Support beyond then will cost taxpayers “significantly less than planned,” he added.

“Whoever becomes PM — and even if they decide to change the Chancellor — it seems to me that the fiscal path is pretty much set in stone, because the markets will not tolerate anything other than what’s on the table,” Turner said.

That could keep financial markets in check for the time being, though firm assurances and more detail on budget plans would be welcome at a time when bond markets around the world are showing signs of strain, said James Athey, investment director at Abrdn, an asset manager.

There’s also some ambiguity about the Bank of England’s next moves. Ben Broadbent, deputy director of monetary policy, on Thursday warned that investors may have gotten too far ahead of themselves in projecting rate hikes amid the recent chaos.

“Whether official interest rates have to rise by quite as much as currently priced in financial markets remains to be seen,” he said in a speech.

The central bank is still expected to be very tough at its November and December meetings. If the economy slows sharply next year, it could later pull back. That said, if the government withdraws some support for energy bills in April, that could reignite inflationary pressures — once again complicating the calculus.

That leaves investors guessing for longer, and economists waiting to revise their forecasts.

“Clarity and certainty, unfortunately, are all too absent,” Athey said.