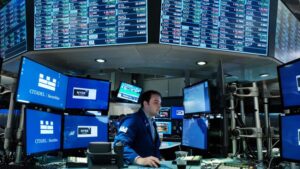 A disastrous earnings report from Snap and less than inspiring results from Dow components American Express and Verizon weren’t enough to keep the Wall Street bulls at bay Friday. Stocks surged on hopes that the Federal Reserve may soon come to the rescue by slowing the pace of its rate hikes.

The Dow rose nearly 750 points, or 2.5%, even as AmEx (AXP) and Verizon (VZ) fell nearly 2% and 5% respectively. The Dow has now gained for the past three weeks, its longest weekly winning streak of the year.

Stocks opened lower but were quickly off to the races after a Wall Street Journal report indicated that even though the Fed is likely to raise rates by another three-quarters of a point in November, Fed members are debating whether to signal that a smaller hike could be in the cards in December.

Investors have started to become nervous that the Fed’s series of unprecedentedly large rate hikes could tip the economy into recession. And apparently some at the Fed are having doubts about the pace of rate increases as well.

Reuters reported that San Francisco Fed president Mary Daly said in a speech Friday that the central bank should not create an “unforced downturn” for the economy with too many massive rate hikes.

Long-term bond yields pulled back slightly, too, after the rate for the 10-year Treasury hit its highest level since late 2007.
Traders work on the floor of the New York Stock exchange during morning trading on October 18, 2022 in New York City.

“The market has been looking forward to the Fed taking a break,” said JJ Kinahan, CEO of IG Group North America, which owns the online brokerage firm tastyworks.

“I think it’s the right call to let the rate hikes they’ve already done play though the system a bit and see what shakes out,” Kinahan added.

The Nasdaq and S&P 500 surged too, rising 2.3% and 2.4% respectively. All three major market indexes are now up about 5% for the week, their biggest gains since June, and have posted solid gains for the month of October.

Twitter (TWTR) also fell nearly 5%, due to reports that the Biden administration may closely scrutinize Elon Musk’s other businesses for a national security reasons before allowing Musk to buy Twitter (TWTR). There were also reports suggesting massive layoffs ahead at Twitter (TWTR) if the Tesla (TSLA) and SpaceX CEO closes the deal.